“The resolution with respect to the 2016 PSA, however, is not the only matter before the general meeting and it seems unfair and confusing if not somewhat sneaky for the OMA to make no recommendation about the other matters…” Justice Perrell

Justice Paul Perell ordered the OMA to, “ deliver a new form of proxy,” declaring, “the current proxy form is invalid.” A new proxy and new control number is being issued by the OMA's to the full medical community.  This new form will require all doctors who voted using the original deficient proxy to vote again.  Efforts by the Coalition’s legal counsel to get the OMA to collaborate on the wording of the first proxy were rebuffed thereby resulting in this need for a second corrected proxy. 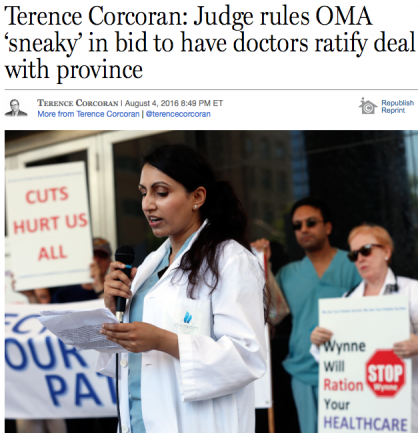 The now invalid OMA proxy form only included pro-PSA language. Justice Perell ordered the inclusion of more balanced language, including resolutions to require the inclusion of binding arbitration in negotiations and requiring the OMA to keep Section Chairs fully apprised throughout negotiations and discussions.  Note: the judge also instructed a re-ordering of the issues contained in proxy.  The first issue  now deals with the requirement for binding arbitration, second is the vote for or against the PSA, and third, the requirement that the OMA consult OMA sections on future negotiations.  All of these items were included in the Coalition’s petition approved by the judge when he approved an order requiring the OMA to hold a public meeting of all members.

The OMA, until today, has attempted to exploit every advantage possible to ensure a “Yes” vote.  The judge referred to the OMA’s first proxy as “unhelpful, unclear, unbalanced, and unfair.  It is a catalyst for a governance meltdown at the upcoming general meeting.”

Perhaps now we will have a fair, open, and democratic contest in which physicians can determine for themselves what’s in their best interest.

A copy of Justice Perrell’s written decision is attached.  Please refer to the highlighted sections 64-75 starting on page 14.

Visit the Coalition of Ontario Doctors’ website at votenopsa.com.

It is critical that each radiologist, resident and fellow speak to 5 referring physicians and other voting colleagues to encourage them to vote NO.  Please make it a top priority.  Efforts like this will increase the reach of the Coalition and ensure the success of the NO side.

HOW TO VOTE | A step by Step guide

You can read the entire decision here (.PDF link)